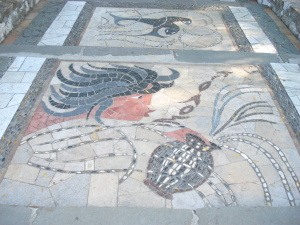 Opening New Doors Over the Coming Week!
I love this mosiac image from my pics, as the water carrier breathes life into the future freeing us to release the seeds of new life. A perfect message for us over this next week as Sun & Mercury in Aries are fired up by Mars in Sagittarius. Yes after what feels like a long ‘hibernation’ as we have been ‘incubating our seeds’ it’s time to step out & activate & motivate our plans for the rest of 2016.

Just be aware that these energies a…re for setting up goodies to be realized from late August after Mr Mars has completed his long retrograde phase, so we must also keep beavering away at our projects with a big growth spurt for these over the next week.

These are adventurous travelling stars to expand our inventive clever bits and with Uranus also in the mix ‘expect the unexpected’! Great timing for web sites going live, booking travel plans & inviting IT support for promo & imaging.

As Jupiter in Virgo continues his encounter with Node & Chiron in Pisces we are also still in a ‘profound mystery’ phase as we confront our personal & global healing crisis. We are letting go of the past…literally & energetically right now, so bless it all & say yes to healing & releasing your old gene codes still locked in the lower nature of fear & confusion.

The fiery energy of coming weeks will stir up the geo political/ economic scene big time with massive fluctuations and extremes. So how do we operate in this weird & beyond belief time?
We remain objective! We watch the global stuff with an attitude of ‘curiouser & curiouser’…remember Alice in Wonderland as the crazy archetypes are strutting their stuff?

Wowsie this is an interesting Fire Monkey Year so far isn’t it?
What we are seeing played out on the global stage right now is the extreme polarization between the new & old worldviews. Conflict & separation V co-operation & reason. The various political candidates in the USA & Australia & everywhere for that matter are just screens upon which we project our personal world view. Getting ‘fired up’ about any of them is an unconscious reaction that just keeps inflaming the separation. Follow your conscience with passion but do it from a calm centre.

This amazing time in global history contains the opportunity to write a new global paradigm. What we are witnessing are things ‘coming to a head’ as the old order is confronted by the unrelenting need for change & liberation…in every religious and political system!
PEACE & LOVE! 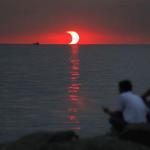 Just a quick hello this month friends, as I am deep in the Pisces zone lovin being ‘off the boil’ for a few weeks making the most of dreaming, resting, and yes more cleaning courtesy of Jupiter in Virgo…lol.  These weeks are time for releasing the past year & gestating our fresh intentions up until March 21st when Sun enters Aries and our new natural solar year begins.

So don’t beat yourself up if you’re also in the mood for down time and couch potato position. Also a fab time to see the many excellent movies around now as this is also Pisces domain.  Mail me if you’d like a session to enlighten & enliven your own individual journey

But I couldn’t resist a little mention of the big news for March with a major Solar Eclipse new moon coming in on Tuesday/Weds depending on your time zone (times below). Solar Eclipses are ‘system re-boots’ marking radical endings/new beginnings in the affairs of the sign they fall…in this case @ 18 degrees Pisces. Eclipses hit the same degree/sign every 19 years so previous timings here are March 1997,78,59,40 etc, so cast your memory back here for clues as to implications this time. They also occur in ‘Saros cycles’ & this one brings “Endings & separations & new situations which lead to very positive outcomes”*. There is also much healing on offer via this eclipse both physically & psychologically, and health & food areas will be highlighted over coming months. We begin to experience the influence over several weeks leading up to the eclipse and for six months after until the next one in September.

The other well documented outcomes from solar eclipses are major weather/geological/ political events, especially ‘under the path’ of the eclipse, in this case over Indonesia with shadow extending up to Japan and Micronesia. No surprises then if we hear of seismic/volcanic events or political turmoil in this region over coming weeks.

With Jupiter in Virgo opposing the eclipse in Pisces events are ‘big’ & ‘extreme’ with important people & systems coming onto center stage. Saturn in Sagittarius is also @ 90 degree challenging square to both eclipse & Jupiter. So all this suggests some really big news & revelations to begin major re-design of religious and political systems.

Pisces associations are: spirituality/compassion/intuition/victims/rescuers/psychology/mental health/deception/lies/illusion/inspiration/clarity/dreaming/art/imagination/film/seclusion/retreat… and so much more but that will do for now! Thus eclipse guidance here as follows:

DO’s – trust your intuition, dreams & visions then take thoughtful practical steps to bring them into form. Get clear about old limiting beliefs that may be impeding your growth into next phase of life. Don’t rush things at the moment as is best to wait a few weeks before implementing major moves.  Be compassionate, non-judgmental & honest. Have faith in yourself and trust the flow of synchronicity in your life to bring you signals on next moves. Remain as objective as possible about people & events. Let go of old toxic people and attachments. Be as mellow & adaptable as possible. Set your intentions over the hours before the new moon in your zone. Practice visualizing the uniting of your left brain with your right brain & your heart in a divine triangle.

DONT’s – rescue victims, over-analyze or criticize yourself or others, worry & fret, believe everything you hear, project your need onto others to be rescued or saved, over-react & do rage, be rigid or hard on yourself or others.

As Pisces eclipse + Jupiter in Virgo + Saturn in Sag are all associated with religion & belief, I have been fascinated by events in Rome, as Australian Cardinal Pell has been giving evidence to the Royal Commission into pedophilia by Catholic priests in country town Ballarat during the 1960s/70s/80s. This is making headlines globally as many ‘victims’ have attended the hearing in Rome in the hope that FINALLY the Vatican will be called to account for the culture that continues to allow protection of criminal priests. The timing here is remarkable as the movie SPOTLIGHT, which tells the story of this issue in Boston received an academy award for best picture. Gotta love Astrology!  One of the ‘victims’ when interviewed stated “What happened in Ireland stayed in Ireland; what happened in Boston stayed in Boston; but what happened in Ballarat has come to the Vatican”. This is incredibly important as another revelation during this 2016 year as the truth is finally coming out of the unbridled corruption in religious/economic/political systems.

This eclipse also activates Mars in the USA horoscope @ 21 degrees Gemini, so we may expect ‘angry words’ on many levels being expressed over coming months. Perhaps people will finally become so disillusioned (Pisces) with the bizarre political system they will start speaking up for radical change? This may also account for Trump losing ground last week as the eclipse challenges both his Sun & Moon placements.

Another association here is the massive refugee tragedy in Europe creating a crisis between EU members as they seek solutions, & Angela Merkel in Germany who initially welcomed millions of refugees is now facing a leadership challenge.

Anyway enough about all that for now, as I would like to end on a positive note by reminding us that the overall outcomes from this eclipse are very positive if we are ready to let go of the past and carefully open our new doors! Enjoy the ride folks…it’s an amazing time to be alive!!

Some links for your interest of a Piscean nature:

‘Adventures in Consciousness’ Spiritual Life Coaching Program – I’m developing a 2 day + 4 day program for Bali plus here on the Gold Coast in Queensland so stay tuned for details in early 2016.