Greetings friends as I return from my sojourn in ‘Piscesville’ full of gratitude on so many levels! Yes I am now Titanium Maggie with my new hip & what a fab opportunity to practice ‘being here now’ & doing the big surrender to the place of non-action. Such an interesting process & it does indeed sum up the whole Pisces journey.

I love the way synchronicity arrives as just what we need to hear so I am recommending ‘The Dalai Lama’s Cat’ to EVERYONE as a charming & powerful gift to yourself for a reminder of Buddhist basics…& it is written by the cat!

OK so off I/we go into our new Solar Round on Weds 21st March at the Vernal Equinox with an excellent kick from Sunday’s New Moon in Pisces to complete our old year. This was the last NM with Chiron in Pisces over the last 7 years, so was loaded with in-depth insights & healing & compassion. Chiron moves into Aries in April…more on this in the main section…

This Aries Ingress is charged up with Mars freshly in Capricorn at his ambitious most productive best…until mid-May. Mars challenges us to be brave & enterprising beyond old models & also keep things steady!

Get set also for a Mercury retro period between March 22nd & mid-April. He is also  in Aries so use this time to develop the zappy startling new concepts zinging around as you also curb the urge to impulsive or angry words.

Here’s the link to my extensive 150 page 2018 Global Report & Horoscopes if you missed it.

The most important thing we can do to support our lives is WORK WITH the Natural Year from March 21st & add each ingredient month by month! 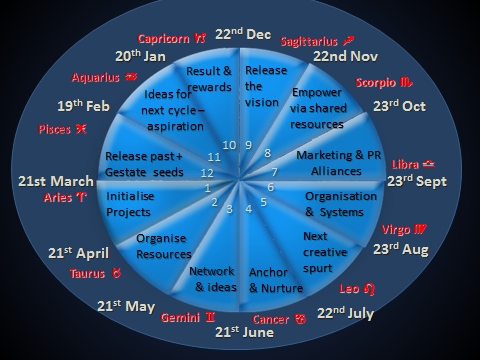 When are they finally going to start teaching this powerful stuff in Schools? The main reason why our world is so out of balance is because we got ‘disconnected’ from nature by the Gregorian Calendar 400 years ago!! Just use this guide & put the dates & actions to take for each ‘natural month’ in your diary ok? You will be stunned how amazing it is to be in synch with the true creative flow of our year! If you’d like the in-depth program from my ’12 System Toolkit’ including details of this monthly process it’s right here!!

As Aries is the beginning of the 12-fold Zodiac process we are impelled to take action & initiate new territory for our creative journey for the year ahead.  Action & adventure, along with risks & challenges motivate this feature in all of us to dare to leave behind the past & open new pathways. Your mantra is “It’s safe for me to open new doors for fresh adventures. I am brave & I love life!”

As Saturn & Mars in Capricorn are midwifing this new Aries beginning the message is have a plan, take full responsibility for your independent activity & dare to set strategic goals that are also realistic. Mars catches up with Saturn on April 1st & 2nd bringing a frustrating few days when it’s best to just focus on your goals & tasks and duck when incoming idiots are strutting their stuff. There could be big bizz/govt actions of seriously heavy war like proportions, so once again don’t go off just wait until the dust settles ok?

We have a much lighter ingredient courtesy of beautiful Venus in her home sign Taurus from April 1st to 24th so enjoy her desire for pleasure & music & gardens to uplift your spirit & focus on your ‘self-worth’ as the keystone of your future successes!!

Chiron is our ‘wounded healer’ centaur whose entrance into Aries on April 17th begins a new 50 year cycle!! Here’s a quick overview from my 2018 Report…

Chiron is the newest member of our Solar System, discovered in 1977 and cycling between Saturn and Uranus with a 50-year cycle. When a new planet becomes visible to us, it activates a new archetype in our collective psyche that demands recognition as an ingredient in our evolutionary process.

The astronomers named him Chiron (no they don’t ask Astrologers they just use whatever name is next on the list of Gods/esses). Then low and behold, the attributes of the mythological God mysteriously correlate with the unfolding narrative of our Global process. Big time synchronicity here, as with so many other Astro phenomena! In Greek mythology he was held to be the superlative centaur, as he was called as the “wisest and justest of all the centaurs”.

His myth contains rising above the pain of his abandonment and rejection to become a wise healer and teacher to many of the great Greek heroes, and mythically the Centaur horse-man symbolically unites our mortal and immortal nature. The horse is considered to be the bridge between the world of form and the world of the unseen. His position between the ‘known boundaries’ of Saturn and the higher consciousness of Uranus gives rise to his “rainbow bridge” title, and his process that brings crisis forcing us to confront our Saturn fears and limitations that keep us stuck in our lower nature.

So he’s the link between our lower and higher nature, which has been available to us since his sighting in 1977.  Yes the Uranus Neptune & Pluto ingredients have been with us over the last few hundred years paving the way for the incoming Age of Aquarius, but it wasn’t until Chiron brought his shaman healing process into the story that we’ve been confronted with the reality of our disconnect from nature and wholeness of a healthy world.

1977 is the year when our Sun began his 72-year passage to align with the Galactic Plane so yes another fascinating timing correlation! So Chiron connects us to Galactic Consciousness! (BTW the mid-point of this was 21.12.12 the end/beginning date for the Mayan Calendar 26,000 cycle.) OK so on with Chiron in Aries. He was last here between May 1968 until May 1977, so we haven’t experienced a Chiron in Aries transit since he was discovered, which was in November 1977.

Yes, the planets are still there even if we don’t know about them, but we experience their magnetisms intuitively or in a non-rational mode. Once they are in our objective awareness they become a much more active force.

As Aries is the beginning of the Zodiac round….or the ‘World Degree’, our wounded healer enters a pioneering period on May 18th 2018 that completes in May 2068 after his 50 year cycle passage! So when a major player like Chiron triggers this degree it brings about an ‘Initiation’ or new beginning – a psychological re-birth that challenges us to transform our concept of reality!

The Aries process contains our confident ‘healthy will’ so we can be brave and courageous and say yes to new adventures into the future. At best, it is the questing spirit in us that dares to risk letting go of the familiar, even if this familiar isn’t too great! And as recent times on the third rock from the Sun have shown, we have a major issue with this ‘healthy will’ business, as the ‘damaged will’ brings us aggression and anger and all the defenses and overcompensations that arise when we don’t feel safe or that we have the ‘right to exist’.

Thus, Chiron’s job over the next NINE years is to reveal this crisis clearly, so we can sort out this primary component in our human makeup! Goddess knows this is essential if we are to ever build a peaceful world. Functional Aries (and Mars who rules Aries) brings us “healthy assertiveness” where we feel safe enough to assert ourselves in the world, and communicate to ask for our needs to be met, without fear of retribution or judgment or rejection or being made wrong.  The trouble is that most folks aren’t safe enough to do this and are stuck in the “passive aggressive split”!

They either believe they have no power to act OR are over-reactive and defiant with a determination to defeat apparent opposition and are unable to co-operate to invite support. This can also mean they please and comply and put up with stuff (and seethe) in their attempts to get loved, and safe, and to ‘belong’. Then when this doesn’t work, they get aggressive and angry and destructive, and end up with the very outcomes they are trying to avoid! Classic stuff.

So the SAFE outcome here requires we have a good look at our compliance or aggression patterns and make the decision to change them, and let go of our defensive behaviors. If you’re relating to this or have friends/family members who may benefit, here’s your re-programming message. “It is safe for me to assert myself – to be authentic – to be brave – to belong – to matter”. Just say this to yourself many times a day as you hold your hand over your belly, the seat of our emotions.

Aries is about our ‘identity in the world’, so it will be no surprise that millions of folks are about to have a little ‘identity crisis’…lol.  Who am I? Why am I here? And this is not just a superficial matter at this time on planet earth as millions of folks spend their day stuck in jobs they don’t like, to earn money to stay on the treadmill existence of our material world construct. And they aren’t happy!  Which isn’t to say this applies to everyone as lots of folks have done the work to become authentic and are living meaningful happy lives. But lots more aren’t!

The outcome once we’ve faced our fear of flying as an independent creative agent is a whole new level of action, so over the next 9 years we’re about to experience some fabulous people doing some fabulously brave edgy things, daring to be catalysts leading the way for the healing and renewal process on our planet.

And a final note on Aries as the WARRIOR archetype. Conscious warriors are not impulsive or driven by knee jerk reaction. They understand the reality that we need discipline to empower and use our will wisely! Enter Saturn in Capricorn, who makes a challenging connection with Chiron in Aries in July, August and  September 2018, bringing us the classic confrontation between the emerging new consciousness and the old guard resistance to allowing innovation and change. I cover this in detail in the Saturn section, when we also bring Uranus into the story. OK so moving right along…to Mars in Aquarius.”

I’ll be introducing Mars in Aquarius AND Uranus in Taurus in my next letter as they both step into their new signs bringing the next major ingredients in our 2018 unfolding story!

One of the major players in our “global re-set” year of 2018 is Chiron entering Aries for the first time since 1968…50 years ago.

So I’m inspired to spend a day with our favourite ‘wounded healer’, so rich in his gifts to us on so many levels. As our world plunges ever deeper into the complexes of the collective anger buried so deep within our culture, how may his process in Aries bring us to a more enlightened outcome over the next 8 years? How can we work with this in our own lives? We will cover:

Reply to this email OR contact me to book in.

Live long & prosper… & here’s the link to my 2018 Global Report & Horoscopes if you missed it.  Maggie