OK friends we are still deep in ‘Piscesville’ gestating our dreams & intentions for 2017 until March 20th, when El Sol enters Aries & we are free to take definitive action!! Yes the crazy 2017 ride continues as more political events keep us distracted from the main game…namely re-inventing our lives by embracing the fab opportunities from the big 2017 players…Jupiter/Uranus! Keep your focus & stay aligned! 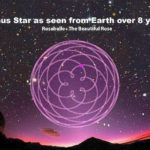 Venus is now retrograde in Aries for 40 days! Her full cycle returns to the same spot every 8 years creating the ROSE pattern! Beautiful synchronicity isn’t it as she is the planet of LOVE & BEAUTY. Her gift now is to build SELF LOVE & courage to step forward in our lives. She asks us to own and value our independent aspirations beyond the expectations of others & release old toxic relating patterns where you are not being valued…yay!

She began her retro on March 4th @ 13 Aries & is free to move forward after May 19th. So for the first 20 days she is ‘Innana the evening star’ as she goes into the ‘dark’ & we no longer see her in the evening sky. This is not a great time to start a love affairs or buy luxury items! Instead keep growing your confidence & self worth to initiate your new beginnings as yes she is in Aries! After March 26th she joins the Sun and becomes ‘Ishtar the Morning Star’ returning from the ‘underworld’ before sunrise, shedding her bountiful light for a prosperous new period.

Here’s the link to my 2017 Global Astrology Report & Horoscopes

March opened with a bang as Mars joined Uranus to oppose Jupiter for the second time and the highly conflicted global story amped up another notch. Their first opposition was in late December 2016 & their final ‘hit’ will be in late September, after which we should see the tensions ease, albeit heaven only knows what’s in store between now and then!

So yes things are uber intense right now & we are all managing lots of things & energies & difficult people et al. So PLEEZE hold your center with lots of positive messages to self & others remembering that we are also working to build new goodies in our lives that will be marvelous!!

In years to come you’ll be able to say you lived through the most exciting & dynamic phase of modern history! Yes the Depression & dictators of the 1930s, McCarthy & communism in the 1950s, Kennedy & King assassinations in the 1960s, Nixon & Watergate in the 1970s were watershed events in their eras. And yep ours will no doubt be remembered as the ‘Trump Year/s’!

The trouble is that when you’re in the midst of the chaos it’s hard to keep the perspective that is only available after the events. This is why I’m always reminding any who will listen to stay OBJECTIVE and simply be aware that we are witnessing a grand battle between forces of which we everyday folks have little true understanding.

I gave a talk last week about the Astrology of 2017 and was asked “what’s going to happen with all this political stuff?”. My answer was “I don’t know!” All I really know is that In terms of the big picture timings of the unfolding cycles of conscious evolution, the battle is really between the unsustainable practices of the old 3D reality program and the birth of the new paradigm sustainable future.  And in this big picture “battle” it sure is the case that 2017 contains all the big ticket global issues “in extremis” …politics /economics/weather…yep Jupiter in Libra opposing Uranus in Aries aren’t mucking around as they amplify the extreme polarization in every level of human & Gaia affairs.

So when we apply psychological principles here we have fruitful territory for our personal growth & evolution. We must own our own inner stress between the part of us who wants to stay attached to the past versus the part of us that is willing to take responsibility for the need to innovate & change…and this can be risky!  Our current social revolution isn’t just about amazing new technologies and robots and faster & better internet speeds. It’s about a global awakening way beyond that!!

I recently had an fascinating chat with one of my yummy ‘daughters’ who informed me she believes that it won’t be long before people will ‘be over’ all this techno stuff, and just want to start writing & learning & interacting with others without all the complexity that makes people so anxious and overwhelmed and socially dysfunctional.

Isn’t that interesting, as this 34 year old lady is realizing that life is so much richer without COMPLEXITY. Yes I know we can’t turn back the clock but maybe she has a point. SIMPLICITY! I’m reminded of the old T.S. Elliot quote that “we shall never cease from exploration until we return from whence we started and know it for the first time”.

Anyway that’s my little rave for this month! Stay in your heart my friends as you keep building your positive lives inspired by being part of our current social revolution toward a conscious world. Stay in gratitude…be kind to self & others…get excited…be aware that wonderful opportunities are right there for the seizing!! Time to check what our planets are up to for the rest of March and into April.

Sun in Pisces until March 20th – Pisces is the final sign of the 12 fold system thus marks the completion of our ‘natural year’. This is why it’s cool to release and let go – take a rest whenever you can – cleanse your body and home – gestate your dreams – use your intuition to connect with your highest nature…and all that stuff!

Venus retro @ 13 Aries – March 4th until April16th but not back to 13 Aries until May 19th – I outlined the basics in the top left column so a few extra points here.  Sometimes Venus retro can bring people back from our past with whom we either need to complete some old karma OR are actually meant to be re-instated in our lives for further growth. Venus also rules money, so apart from not being a time for big expense items it is a time for reviewing your finances and if necessary divesting yourself from joint situations that no longer serve you. Great time for enhancing our self-worth and home renovations may also apply.

Full Moon March 12th – 22 degrees Sun Pisces/Virgo Moon – On the upside this is a sweetie full of healing vibes from Chiron with the Sun in Pisces, so use this one to meditate and hang out with healers and visionary people to inspire your own visionary nature. Downside may arrive from Saturn in Sag in hard aspect to the full moon unleashing another big dose of truth & lies scenarios. We can use this to get honest and real about where & how our BELIEFS may be limiting us & to deal with tasks/duties and not just hide under the blankets!

Mercury into Aries – March 13th until April 1st – just a quickie as he’s only in Aries for 2 weeks. Mental and verbal energy is active and may be aggressive here, but upside is confidence to speak up and out to develop your projects and goals.

Sun into Aries @ Equinox March 20th – and so begins our new NATURAL YEAR! One of the simplest ways we can empower our lives is to align our activities with the natural year. Aries is the first sign thus features include ACTION ENTERPRISE INITIALIZING RISK COURAGE BRAVERY. It’s even better to wait until the New Moon in Aries on the 28th for full systems ahead!

New Moon March 28th @ 7 degrees Aries – The ruler of Aries is Mars who is placed in Taurus on this new moon, thus it’s wise to temper our fresh enterprise and action with very practical foundations. Mars in Taurus likes steady building processes and offers tenacity and strength to your endeavors.

Saturn joins the Galactic Centre @ 27 degrees Sagittarius throughout March & April & for the final pass in late November 2017. The GC is the black hole that emanates the magnetisms for our whole Galaxy & Solar System. It’s so interesting that it’s position in Sagittarius underpins the whole nature of our human nature…the belief systems that drive our evolutionary growth! This is a significant point in Saturn’s cycle as the last time he was here was 1988…the prelude to the massive events of 1989 – fall of Berlin Wall & the arrival of Russia & China into the globalization systems. So are we also currently poised for some really big global re-arrangements from next year when Uranus enters Taurus & Saturn enters Capricorn?

Jupiter in Libra square Pluto in Capricorn @ 19 degrees – They made their first square in Nov 16 with now this one in late March & the final pass is in August 17. Their cycle began in Dec 2007 and was a major factor in the 2008 GFC. So we can expect more challenging plutocratic & economic activity in 2017 with the themes of power, money and resources. Personally we can set big goals.

Here’s a link to a youtube interview I did for inclusion in a series & book on the nature of DESTINY & Fate. I cover core ideas about the Sun & Moon in Astrology and you may find it interesting…hope so! And I am now only weeks away from launching my new Membership Program as Sun enters Aries…yay!

Stay tuned for my first offering… Onward & upward we go my friends – have a fantastic March daring to live your dreams!  Love to all Maggie