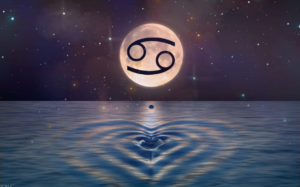 Well folks there’s some pretty intense energy flying around as we head toward the power packed Full Moon in Cancer next Sunday July 9th! Yes if we can keep our cool over the next few weeks it will be Leo time…hoorah…and we can get on with being fabulous again after doing our little personal death/rebirth thing!

Yep it’s easy to feel a bit beaten down with all the doom & gloom out there so our job is to NOT BUY INTO IT! Yes we are in times of radical shifts & as it’s Cancer time our core safety issues are right up! Please join me for a few insights into the ongoing drama of this tumultuous year…and how to use these extraordinary energies to let go of the past and say yes…GULP…to the unknown future!

You are welcome to book a personal session & please click like on Universal Astro FB page for updates between these letters!
Well early July has already brought us some major power themes, as the star players of 2017 are in one of their peak periods of their challenging stand off scenarios… Yes Mars in Cancer is triggering the Zietgeist revolution zone until July 21st, so the themes of power & control are writ large personally & globally.

Ah and let’s not forget Happy Birthday America! I send my love to all my friends in my much loved US of A. I’ve lived there & some of my besties live there. My prayer is that the essential essence of what made America the first great experiment in freedom at the last revolution, will be re-born over these coming years, as you pass through the drama of the dissolution of the current power systems and await your next re-birth in the 2020s when Pluto returns to where he started in 1776.

OK so on with the show! This Full Moon @ 17 degrees is totally powerful with Sun in Cancer with Mars OPPOSITE Moon in Capricorn…with Pluto!!  Then we add the fact that they are all forming challenging connections with Uranus in Aries OPPOSITE Jupiter in Libra and we have the whole box and dice for the power themes of this year.

So is it any wonder that the G20 meeting is happening over this period? Ah Trump will get to hang out with Putin and who knows what’s on the way? I mean really…just get that anything can happen this year – we are beyond the norm people. I have included an excerpt from a clever article below re this G20 game…scroll to end it’s funny and insightful…

In my Jupiter in Libra Article I clearly showed the history of BIG international deals/negotiations happening on this cycle. Here’s the previous cycles 1933/4 1945/6 1957/8 1969/70 1980/81 1992/3 2004/5. In 1933/4 Hitler became Chancellor of Germany & the rest as they say is history. 1945/6 saw the creation of the “Iron Curtain” USSR Eastern Bloc, as they were carving up Europe & the Middle East & China’s civil war between the Communists & Republicans paved the way for Mao. In 1957 The Civil Rights Act was introduced  kick-starting the political movement, plus the EU was formed. So if we can get past the hype and fake news (good luck with that) rest assured there’s some pretty major deal brokering happening @ this Full Moon, as China & Russia are buddying up for massive $ infrastructure deals and the supposed democratic western system is in chaos!

Fascinating stuff my friends and as ever I suggest we just stay in ‘objectivity’ as we witness our geo-political & economic systems starting to morph into a whole new phase. Personally we may be navigating some tricky territory in terms of feeling effective!  Mars/Pluto combinations are renowned for anger/control/resistance/ruthlessness & when we add Mars to the Sun in Cancer then watch out kids as emotional reactions will be pretty full on as we head into next week. Suggestion! Duck for cover and if you do need to defend or act on behalf of home or family pick your battles.

OMG we need some positives here don’t we? And yes we have peace-maker Venus now enjoying her time in Gemini until July 31st PLUS Mercury (ruler of Gemini) in passionate Leo. These two are the magic ingredients to activate & motivate our minds & ideas into fresh possibilities, as we are breaking free of old limiting beliefs that we can’t be successful & powerful!

So if you’re feeling frustrated & blocked just do lots of deep breathing and repeat after me “It’s safe for me to release the past & say I can have it all”! And ask yourself: “How do I change my way of thinking to break down the barriers?”, as you also make the best of some fun and social connections from Venus/Mercury over coming weeks. Stay LIGHT as much as possible…even if you have to talk yourself into it!

There’s also a yummy trine from Neptune in Pisces in the mix and we need to give this lots of power to trust Universal Flow and timing. It’s easy to succumb to survival/safety stuff right now, so remember the upside of the challenging Full Moon energies contains breakthroughs and great career developments if we’ve been good hard working kids OR you’ll know if it’s time to let go of a scenario & move on.

You’ll really feel a huge shift when Sun strides into Leo and is joined by Moon for our New Moon in Leo @ 0 degrees on Sunday July 23rd! Once again activator Mars is in on the show…and I do mean show as Leo is all about drama & performances! This sets the stage for the much heralded Solar Eclipse on August 21st – this will be the SECOND Leo New Moon and has all sorts of bells & whistles for dramatic leadership goodies. Much more about this big enchilada in my August letter!!

Mars with Sun in Leo is high octane action stations to ignite fresh fire & passion! Be proactive & focus all your energy on the next phase of your creative growth to make the most of this one in late July & August! Cheers and blessings to you all Maggie!

Check Out My New Membership Platform starting with my life changing ’12 System Program’! NOW AVAILABLE to download over 4 weeks.

I’ve had lots of requests to get back to basics for the next few Astro Workshops!

I totally love this core territory! It creates so much space for great personal interaction as you connect with your 12 ESSENTIAL VOICES! Then we add a few aspects between them and we’re off and away for the basics of Chart Delineation… And more space for some ASTRODRAMA as we meet our voices and see how they get on with each other! Lots of fun and creative outcomes when we meet in August. Please join us!! Mail me if you’d like to book in Venue is in Carrara on the Gold Coast $80 from 10am to 4.30pm All Welcome!!

Blog from Port Phillip Publishing – July 3rd 2017 – Dear Reader, Oh to have a miniature drone that can fly from Australia to northern Germany!  We’ll need it to have a good signal too, and speak a few languages.  Mission: gather intel on what’s said behind closed doors.

The G20 meeting is on this week. We need our drone on the wall, or inside the flowers somewhere. Putin and Trump are meeting up for the first time since the US Prez was elected. That should be spicy enough. Now we have the US rattling China by sending in a Navy destroyer into its neighbourhood .

Who knows what agendas are at work? Not me, but I’ll take a guess. Admittedly, I’ve not followed geopolitical stuff too closely lately. All that hoohah about Russia fiddling in the US election looks like BS to me. Somebody wants Russia to look like a threat.  Why the fuss then?

I’ve told you about economist Michael Hudson before. I believe his take on this before anyone else’s. He said back in April there wasn’t a shred of evidence that Russia was part of this. Hudson pins it all on propaganda from the war hawks keen to take on Russia.

At the very least, the military industrial complex needs an excuse to park all the weapons it produces (and bills to the US government) somewhere. Hudson said encircling Russia and China was the logical place. Check out this map from The Independent in the UK a few months back…

Apparently NATO now has the biggest military build-up in eastern Europe since the Cold War. Now imagine this with a Russian mindest — after being invaded multiple times last century.  The funny thing is Trump did seem for real when he tried to tone down the belligerant stance toward Russia when he came on the scene early on. He was a genuine wildcard ­— that’s why most of the Republican establishment didn’t like him, or want him to run.

Now I see in The Wall Street Journal that the US Parliament is about to vote into law a bill to stop Trump from easing any sanctions on Russia.  The paper reports…

The bill cleared the Senate last month by a 98-2 vote, a rare show of bipartisan unity in favor of legislation that would slap Russia with new sanctions partly because of the U.S. intelligence community’s assessment that Russia interfered in the 2016 U.S. presidential election.

All this is becomes incredibly clear and intriguing if you pick up a copy of George Friedman’s book The Next 100 Years: A Forecast for the 21st Century. He wrote it in 2009. It’s quite spooky to see how accurate he’s been since. I’m not sure I’ll get to see the rest of the 90 years play out, which is a bummer. However, Friedman had 2015-2020 pegged as the period when the United States would once again become ‘obsessed’ with Russia.

Friedman forecast both countries would manoeuvere around the world to weaken or discredit the other. Russia would be pushing its borders out everywhere to build out a strategic buffer. The US will intervene wherever it can to disrupt any alliances or powerful blocs forming. If Friedman’s right, and it looks like he will be, this US versus Russia dyanamic is going to get worse before it gets better. It may truly escalate into somehting like the Cold War 2.0.  In the book US power ultimately prevails. Friedman has Russia collapsing in 2020 as demographics and other factors work against it. Remember, this is based off a forecast he made eight years ago, but we’re watching it play out in real time. One of the tenets of the book is that the US is happy as long as every else is in chaos. That’s partly how it projects and holds global power. A bigger component is the US Navy and the USA’s total control of the world’s sea lanes. Where it goes from here in the short-term, I have no idea, but we can’t take it for granted that world peace will hold out.